Informed Choice, and the Confused Soul

It was a dark and damp Friday evening at SUNY Albany.

Every Friday night I attended the reform services on my campus. It was pretty much the only thing we consistently did, so I took it very seriously.

However, that fateful evening I made an error. There was a poster showing the times for the different prayer services. I scanned quickly, and must have read it wrong.

When I arrived, I watched  as everyone from the reform services were already leaving. It was disheartening, since this meant I was holding at 0% of my obligations to be a part of the community.

Informed Choice: What to do?

I decided to make a huge sacrifice. To go way outside my comfort zone. 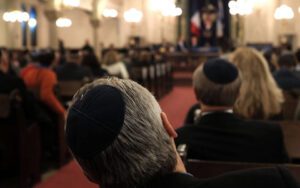 I would stay for the conservative services!

If you recall from my last post, joining the reform movement was already exceeding my norms by leaps and bounds. And I was scared off a bit by the word “conservative”, not to mention I distinctly recalled a moment from my summer camp when a camper said he was conservative, and the people around me literally hissed at him.

But I was stuck.

I either needed to do something challenging, or risk feeling like a failure in the current path I was on.

So I walked in, and sat down… With about three or four other people.

We uncomfortably stared at one another.

For the uninitiated, Jewish communal prayer requires a minimum of ten adult Jewish males (called a minyan). Some more modern groups require any ten adults, gender is irrelevant. No matter how you did the math, we weren’t doing so hot.

They kept on talking about their backup plan of “walking to Shabbos House“, which meant absolutely nothing to me.

But I had already chosen to go along for the ride, still in a panic at falling short on my one and only responsibility.

After the group gave up on getting their requisite numbers, they all got up to start walking toward this mysterious “Shabbos House”. 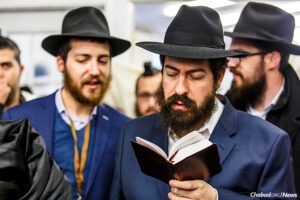 I recall vividly as we neared the location. There he was. I saw a man in full chassidish getup bowing back and forth in the window, and I felt panicked and jittery. I had heard about the Chassidim before, but I had never met one. All my knowledge of this group was from the media, who did not paint a very likable picture.

But I braved my qualms and concerns, and walked in.

I was very much not dressed the part. Most inside were dressed quite nicely, and it was a pretty conservative looking group. I, on the other hand, had shorts and a t-shirt, sneakers, long hair, an earring, and nothing covering my head.

Yet it seemed like the only one uncomfortable with my presence was me. Everyone in the room was fantastic, almost as if they were preparing for someone like me to show up. They patiently dealt with my complete lack of knowing what was going on, and helped me with everything.

After the services were over, everyone began preparing for a festive meal. There was some singing, a blessing made over wine, and then everyone lined up to wash their hands. 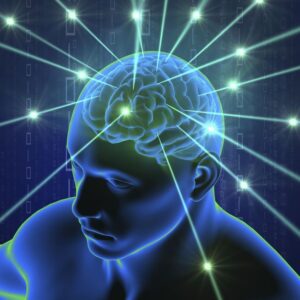 And this was the key moment for me.

Someone explained to me what we were doing. Others explained some of the historical significance. And everyone in the room knew exactly what was going on and what to do.

This was apparently a ritual done all the time, sometimes multiple times a day. It was commonplace and ancient. And yet somehow in all of my inquiries and studies, in all of my time working so hard to be an exceptionally knowledgeable and active Reform Jew, this simple and ubiquitous thing just never came up.

And this, yet again, threw my whole existence into question.

I walked away from “Shabbos House” early. There was just too much to take in, and I was barely ready for what I had already absorbed. I knew, however, that I would be back. I had to return. There was knowledge to be acquired that I had up to that point never been exposed to.

But if I want to be true to myself, more than anything, I felt angry, and more than a little betrayed.

I spent countless hours with people who were supposed to be teaching me anything and everything about Judaism, so I could make an intelligent and informed decision about what I would practice and what I would leave behind. Could it be they forgot things as simple as a daily hand washing ritual, and my lack of informed choice was just an oversight? Or could it be that knowledge was intentionally withheld from me?

The Catholic Church spent much of its existence withholding knowledge from the masses. The average person was unable to decipher the complex texts in Latin, Greek, and Hebrew, and were left vulnerable to the whims of the clergy, since they were the bearers of all wisdom or the tools to gain or interpret further wisdom. But this can only go on for so long. And when the information became accessible, and the Protestant Reformation stormed its way through Europe, Christianity was changed forever.

Was I about to change forever? Was information intentionally withheld from me? If so, why? Why would something so innocuous never even get a slight mention? What exactly was the fear? What was the danger in my exposure to practices not common among most Reform Jews?

My conclusions did not make me happy.

Unfortunately, I believe the information (and lots more) was, in fact, intentionally withheld from me and many others. There was an agenda. Judaism’s Reform Movement has principles and has a platform. They have beliefs and practices they wish for their practitioners to adopt, and ones they wish them to steer clear of. And if they are among the latter, it is not uncommon simply not to expose people to them.

I’m not saying I don’t understand or sympathize with the practice. I’m a parent and a former teacher, and to a certain extent I think we need to withhold information. Not forever. Just until the moment is right or until the child or student brings it up on their own. But even then, it is a thoughtful and intelligent process.

To a certain extent I think we need to withhold information. Not forever. Just until the moment is right or until the child or student brings it up on their own. But even then, it is a thoughtful and intelligent process. Click To Tweet

But this was different.

What did they have to gain by never telling me of an age-old hand washing ritual? The only answer I can come up with is they were gearing my actions and practices. They wanted me to behave a certain way. They were creating people who behaved within the manner they hoped for. Again, I understand the idea. But to claim this is a process of liberal thought is inaccurate, at best. And to claim that its members are acting based on informed choice is downright dishonest.

To my great regret, up to that point my decisions had not been guided by informed choice, but by uninformed inertia.

And I would never let that be the case again.

It was time for yet another change in my life.