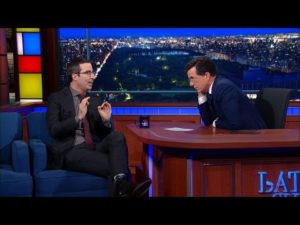 I remember the days of soaking in the Colbert Report and Jon Stewart and John Oliver. None of them, for the most part, represent my political thoughts or opinions. But they were always on point. And always hysterical.

And for reasons I hope to explore in this article, I feel like I’ve lost all of them. Two of the three of them are still quite active and extremely popular; I just can’t stand to watch their routines anymore. Not even for a few moment. I barely crack a smile. And it pains me that I no longer have this outlet.

Humor has gotten me through some pretty dark times. And who doesn’t love a good laugh?

I just wish we could return to the good ole days, when these folk made me laugh all the time.

I unabashedly enjoy a good racist, sexist, or ethnic joke. It’s a fantastic world of humor. And it would be a shame to lose out on a great outlet for a few good chuckles.

And I don’t differentiate. They’re all funny! I enjoy jokes that make fun of men or Jews or Americans or any other group I identity with. A funny joke is a funny joke.

If the motive of the “insensitive” joke is good-willed humor, the joke has all the potential in the world to be funny. Place a small amount of hate into the tone of the teller–even the tiniest amount–and all humor is instantly sucked out of what could have been a comical tale.

Hate is the enemy of humor.

I repeat: Hate is the enemy of humor.

And this is one of the reasons I miss Jon Stewart so much. He wrecked so many people with his brilliant words and rhetoric, and in all of it, I never felt like there was animosity hiding behind his thoughts. I felt there was political motivation. And certainly an urge to impact others with his words. But it always felt like he was searching for the truth, rather than spewing venomous hatred onto others.

And always, his primary goal was humor.

Even with his political rivals, like Bill O’reilly, it felt like the banter between them was taken in the humorous spirit it was meant.

In walks his replacement, Trevor Noah. I loved Trevor Noah’s standup comedy. I thought his jokes and delivery were very creative. His impersonations were top notch.

And yet his version of the Daily Show is completely unwatchable to me.

The reason: I feel hate in every word that comes out of his mouth. By all means mock Donald Trump. Hell, it’s all they ever talk about these days (we’ll come back to that). But hatred? Come on! It’s beneath political comedians to have animosity toward those they mock.

And hatred is the enemy of humor.

If you cannot suppress your hatred of your topic, choose a different topic.

Which brings me to my next point.

Isn’t there anything else to talk about!?

Don’t be fooled. There are other topics besides Donald Trump. But it doesn’t feel that way anymore.

One of the things that made John Oliver so special was that he usually stayed far away from obvious, mainstream topics. But now he’s joined the crew of comics who explore one topic and one topic alone: The Trump.

Don’t get me wrong. Trump’s a treasure chest of things to mock. He says more crazy things in a day worth tearing apart than who knows how many of his predecessors combined.

But so many of us are sick of hearing about it.

And in a field where creativity is so important, choosing not only the same topic, but a particularly easy one, just demonstrates their writers have gotten lazy and uninventive.

Good ole George Bush Sr. and his friendly sidekick Dan Quayle provided the American people with four solid years of entertainment fodder. It was a golden generation! Amusement galore. However, it never felt overdone. And yet, with Donald Trump I was getting sick and tired of the jokes before he even took office.

So you have this wonderful trio of funny disciples of Jon Stewart, who combined have provided me with countless hours of laughter, but now spend their every waking hour recycling the same hate-filled jokes as each other on only one topic.

And I wouldn’t even know if they decided to try a new path, because I stopped watching a while back already.

I’m not sure political comedy can be resurrected once the sword has already pierced its heart. But I hope it can. I think people, particularly the younger generations, find this to be a more palatable way to become educated than newspapers and documentaries. You can argue that it’s a flawed method, since it’s inherently biased; however, you can easily say the same thing about any news program or publication. Where are biases not overwhelming in the media? At least this way we receive important information and a few solid chuckles along the way.

Sadly, the odds of John Oliver and the others reading my post are pretty slim. They should know, however, that there are those of us out there who really appreciate their brand of humor, regardless of political leanings or affiliations, but are frustrated and feel that they could be doing what they do better.

Comedy, among other things, has repeatedly breathed some vitality into my soul. But it only works when it is done with the spirit of levity and joy with which it is intended. Slip outside even a little, and the art is tainted.

Please don’t rob me of something so special to me!