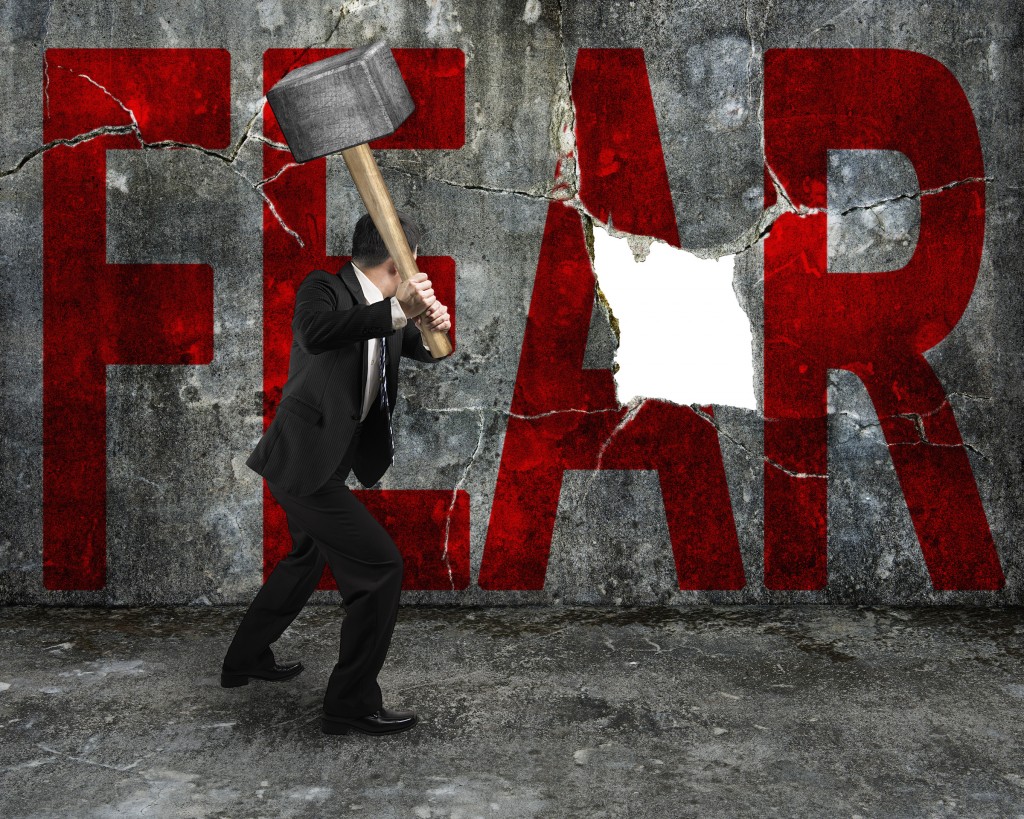 When I was a child, I was riddled with fears. I’m not exactly sure when the mental switch happened in my mind, but at some point I decided that the time had come to remove all fear from my system.

Fear controls you. And I don’t want anything in charge of me but me.

Two fears I had that I have faced up to and essentially conquered are the fear of needles and a fear of public speaking. I’ve dealt with both in a similar fashion. Arguably the only way to conquer a fear is direct confrontation. It is certainly the most effective.

To this day, when I know I will be speaking publicly, my body has an odd reaction. I cannot eat beforehand. I’m a bit restless. And I second guess every word that I will imminently be saying. I’m fine once I get started, but I have yet to figure out how to fully cool the nerves before I get there (despite faking really well that I don’t have a care in the world).

I decided to take every opportunity I could to speak publicly. I still do it, never refusing opportunities without a good reason, and constantly volunteering to get up in front of crowds. Like an addiction, even a fear that has been conquered still has small vestiges in need of eradication. With each word I say out loud in front of others, I grow stronger.

Most who meet me would never imagine this is one of the things I struggle with, and I credit that to facing my fear so aggressively I have virtually eliminated any bits of it from my life.

My fear of needles and blood and anything surrounding them has been quite the adventure. I used to get nauseous every time I had a simple blood test. I thought there must be something terribly wrong with me physically, but I was told by many reliable sources that it was all in my mind, and there should be little to no physiological reactions to losing such a small amount of blood.

So what do you do in such a situation? I signed up to give blood.

Face the fears head on, right?

Face them I did! I went to the drive trembling like a small child, and walked away feeling like I had climbed a mountain. I have since given blood several times, and even though one time I fainted because I stood up too quickly and another time some bozo nurse mangled my arm (and blamed it on me and my veins, of course), I will still happily give blood whenever the opportunity arises, with my head held high.

Fear Is About Freedom

Some might argue that fear is natural, and that there’s no reason to be upset about having a few here and there. But I disagree, since fear to me symbolizes something so much greater than just a small impulse in the system.

It is all about freedom. Without control over yourself, you are never truly free.

I do not like to have, even for a moment, a lack of control over my life or my body. I was controlled by an urge to bite my fingernails for over a decade, and they were nasty and chewed down to the point of intense pain. The day came when I was ready to no longer be controlled by something so ridiculous.

I fought back and won, and even though I basically never bite my nails anymore, there is still this part of me that wants to. A part I fight to beat down every single day of my life. I used to be controlled by an intense sugar addiction. A small bite of anything sweet would leave me running after every donut within a mile. Again, I fought back with a great intensity, and it’s been over two years since I’ve touched such food. I can proudly say that you can place a stack of freshly baked chocolate-chip cookies right in front of me, and not only will I not touch one, but the urge that used to be the death of me is completely gone.

However, like everyone else, I still succumb to fears and compulsions all the time. Every day is a renewed battle to try and gain full control and mastery over myself, and a long and arduous process of self-evaluation to figure out where I still need copious amounts of improvement.

That’s not to say I beat myself up about any of this. Life is a long series of successes and failures. Life is inherently improved by celebrating your every success, no matter how minuscule or seemingly insignificant. And life’s failures are not meant to be excuses for depression or self pity, but rather opportunities for learning and growth.

Unfortunately, it’s so very easy to get everything confused. We can brush off our successes as if they are tiny and unimportant and pound mercilessly upon ourselves for each and every time we don’t live up to our own expectations.

This is a pure recipe for a disastrously sad and highly unfulfilling life.

We should all be blessed to be introspective enough to see our own weaknesses. Brave enough to recognize them not as faults but as challenges. Powerful enough to fight back against each and every one. And fortunate enough to emerge on the other side better, stronger, happier people.