There are a lot of reasons I am writing this post. However, the biggest reason is to just get some things out into the open. Things I’ve been bottling up for way too long, all starting with the first dilemma.

Many years ago I worked at Cornell University. I was in charge of a Jewish outreach program there.

My wife was running an incredibly important program, sadly filled with complications and controversies. The extraordinarily noble goal was to unite the different elements of a rather divided community in a program that was educational, fun, enriching, and spiritually invigorating.

We had a special guest visiting from Israel, who would be leading a musical prayer service followed by a communal meal. The dilemma? We wanted to try and get all the different elements of the community to join together for the prayer service.

This issue was not just one of preference. There were countless philosophical and theological issues and concerns at play here.

The stricter elements of the group (orthodox) pray with what’s called a mechitzah, a physical separation between the males and the female. The purpose is essentially to improve concentration on the prayers. The other groups not only do not pray in this manner, they find it anywhere from antiquated to offensive, and would never willingly pray in such an atmosphere. And neither group is known for making a lot of concessions on their beliefs or practices.

But the whole program hinged on getting everyone together. And it was my responsibility to figure out a way to make it work. 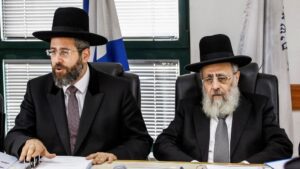 I contacted an authority on Jewish law in Israel, someone I knew and greatly respected. And he had a solution, which seemed to be a great idea. There would be three sections: A men’s section, a women’s section, and a section where people could sit how they choose. The ideas was simple. From the strict perspective, we just needed to give the ability to do the “right” thing. From the less strict perspective, they just needed the option to do things the way they preferred and were used to.

This seemed to solve all problems. And I flew with it.

But not without serious trials ahead of me. I fought battle after battle with many people over the course of well over a month. However, when all the smoke cleared, I was on top of the world. I had conquered every objection.

I even recall a student who vehemently and vigorously argued with me about the permissibility of the mixed section. After he couldn’t take it any more, he contacted his own religious authority… who confirmed everything I said.

I fought and won an uphill battle. It wasn’t easy, but I prevailed.

Now all we needed to do was survive the nightmarish logistics and we were on track to have an epic program. We would unify the elements of a fragmented community, and inspire a multitude of students hungry for such inspiration.

And then my phone rang…

Through the wild Jewish grapevine, my boss had heard about the program we were running, and the solution we had devised in order to make the program work effectively.

He told me in no uncertain terms that the solution was completely unacceptable. And for all issues like this one, we were now required to ask him and only him. He even approached the rabbi who I had spoken with and requested he no longer answer my questions, thus closing off a major resource in my life.

There I stood, stuck with an insanely difficult challenge.

I could uproot things as they were and try and see what new solutions we could come up with on short notice. It is fairly likely I’d find no viable alternative in time, thus in essence destroying the program we’d been working on for months.

The inevitable results of doing so would be personal and professional embarrassment. A community that liked, trusted, and respected me would need to rethink their position, since I had stood so firmly behind this idea, and canceling the program would just be a giant declaration that I was wrong and had been the whole time.

I would watch endless hours of hard work come crashing down beneath me, as our program gets projected toward certain failure. I can only imagine how great our international visitor would feel, knowing that he arrived to work with a mere fraction of the students he was expecting, and would only be reaching a very limited population.

And let’s not forget the potential marital discord that could erupt. My wife had put everything into making sure the program was all set up and ready to go. 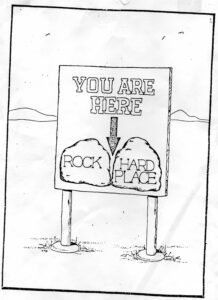 I could just ignore the phone call, run the program, and risk the overwhelmingly likely consequences that would arise.

And I chose the second option.

I took the phone conversation and just bottled it up inside me. Until now.

My contract for that job was not extended for a second year. I’m sure this “incident” was hardly the only reason for my dismissal, but I’m certain it was a hefty contributing factor.

This story has been eating at me for over a decade.

Sometimes it’s healthy and healing just to get these thoughts and feelings outside of you. I wonder all the time if I did the right thing. I wonder if it was wrong to place the health of my marriage and my personal integrity ahead of job concerns. Or if abiding by my employer’s wishes would have ultimately been healthier for both of these things. I wonder.

My dilemma was real. Painful. Overpowering. What would you have done?

Sometimes it's healthy and healing just to get these thoughts and feelings outside of you. Click To Tweet

8 thoughts on “My Overwhelming Dilemma: What Would You Do?”