I have been immersed in the world of health and fitness for several years now, and there are several health and fitness myths that pop up time and time again. Their time has long passed and these myths are not only confusing, but they are downright harmful.

Wouldn’t it be nice if I had the power to somehow put these to rest forever? I know I don’t… But at least I can try and do my part. Or at the very least, I can rant a little… which always feels good.

Health and Fitness Myth #1: BMI is an Efficient Way of Determining Healthy Weight

BMI (Body Mass Index) is the stupidest measurement of healthy body weight in existence, and won’t seem to die. Doctors still use it. Trainers still use it. People still go online to check to see “where they’re holding”.

BMI is useless. It takes into account age and height (and sometimes gender), and not a single other factor. It doesn’t deal with body type or shape. And it certainly doesn’t take into account body consistency. That means an extremely athletic, muscular man can be considered obese by BMI standards, since they are “heavy” due to lean muscle weight.

I have a few pounds to lose here and there, for sure. But I’m broad shouldered with a good deal of muscle. So according to BMI, I’m on the very high end of overweight. Anyone who would look at me would know this is ridiculous, and if these are the standards, then we’re all in terrible, terrible trouble.

There are many fine ways to determine if you’re at a healthy weight, including taking your measurements and the good ole mirror. But please let BMI rest painfully in its grave!

There are many fine ways to determine if you're at a healthy weight, including taking your measurements and the good ole mirror. But please let BMI rest painfully in its grave! Click To Tweet

Health and Fitness Myth #2: Running is the King of All Exercises

The story is an old one. He’s decided to get in shape, so he’s grabbing his running shoes and pounding the pavement. And a week later the only exercise he’s doing is mass Cheetos consumption.

The  truth is, running can be a wonderful exercise. It can also massacre your knees, and is frankly a miserable chore to 99.4% of the universe. There are many, many exercises out there that are not only easier on your system, but the most important thing is that you find them enjoyable. It should be a complete given that the exercise you do will always be infinitely better than the exercise you don’t do.

Search around for something you enjoy that makes you feel good. Then do it. Do it often and repeatedly. Go hiking. Play Dance Dance Revolution. Take a combat pole class. Don’t just do something because it feels like it’s the only choice due to society’s unwillingness to embrace diversity. Do what’s good for you! 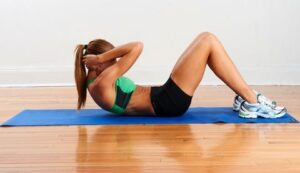 I recently got into a bit of an argument with someone because they were looking for an exercise class that focused on reducing fat and shaping the abs area. I told her there was no such thing; those who make the claim are just using a gimmick to get people’s attention.

I realized quite quickly we were going in circles. She wasn’t at all ready to accept what I was saying, and all I wanted to do was just hit my head against a wall.

Fact: There is no such thing as an exercise course, type, or program that can focus on the location where fat is reduced on the body.

Fact: Some exercises are more intense than others. They will therefore burn more calories and have a greater impact on your metabolism. However, if you hate them and stop after a couple of weeks, it’s not really worth it.

Fact: Trends pop up over and over again. One day it’s yoga, the next it’s Cross Fit, the next it’s naked hippo wrestling (not popular yet… but maybe I finally found my million dollar idea). They’re all great! So long as you love them and stick with them, you will get in better shape, burn calories, and ultimately have a smaller waist.

Just don’t fall for anything that claims it is the secret to trimming your core. Because the truth is and always has been, there only is one secret: Hard work. 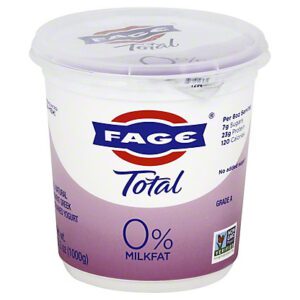 Yes, it is true that if you reduce or remove the fat from an item, the calories will be inherently reduced. However, there are two major flaws here.

First, there are age-old misconceptions in the perspective of fat. Fat does not make you fat. It doesn’t. I swear to you! Some fats are most certainly better than others. And believe it or not, some are downright healthy and completely recommended in a healthy diet.

Second, it’s rare that fat is removed and then they’re done. Normally fat reduction will interfere with flavor, so they’ll make up for it by replacing the fat with something else, which is likely chemicals or copious amounts of sugar. Chemicals are a whole other discussion, one that is understudied, but come on. I don’t think anyone really believes that stuff is meant to be consumed by humans. Or that the industry cares whether or not it’s harming us. But sugar we know is bad news. So, you’re taking natural fat out of a product that may actually be good for you, and replacing it with something that is likely or definitely causing us harm.

But boy are we ever attracted to that “low fat” label…

Health and Fitness Myth #5: Protein Bars are a Good Source of Nutrients 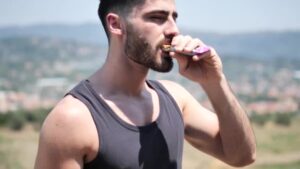 Protein bars are candy bars with a bunch of soy crap in them. With, of course, brilliant marketing.

Every time I see someone eating one of these glamorized piles of sugar, I wince. They spend an hour in the gym working their butt off, knock out a good solid 300-400 calories, only to suck down two Cliff bars at the end, giving themselves a calorie surplus, a whole bunch of nasty sugar, and a false sense that they have consumed a bunch of muscle-building protein.

Throw these bars in the trash. Save some money. And figure something else out. Anything. A whey protein shake. Beef jerky. An apple with some natural peanut butter. But stop being fooled by an industry that doesn’t really care about your healthy lifestyle goals and just wants your hard-earned cash.