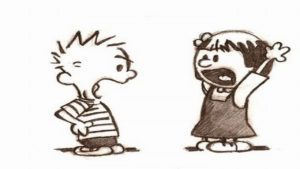 We’re in a complicated generation.

I listen to podcasts all the time, and I think the most common thread I feel throughout what I’m hearing is that people just don’t know how to argue anymore.

In my estimation, there are four rules to a good, old-fashioned argument. Four rules I like to live my life by:

But what do we actually see, seemingly all day everyday?

People constantly tackle issues based on gut reactions or something they heard one time. They’re not willing to do the leg work to really understand what they’re saying. They say whatever comes to mind and don’t really evaluate their thoughts and opinions. And they make them instant canon.

And they discount others’ opinions. They think of others’ thoughts as irrelevant or biased or stupid or even racist. There’s an assumption that if the opinion is different from their own, it is evil. There is no consideration of the possibility that another person might actually be saying something worth listening to.

Furthermore, I often see these uncomfortable spectacles where one party in a discussion is arguing using logic and facts while the other is using reactions and emotions. This type of discourse never produces positive results and is completely pointless. When data is presented and the other party says “Well, that’s not how I feel“, it’s time to move on from the discussion at hand.

Finally–and this is the part that irks me the most in our generation–we’ve seemingly lost the ability to disagree without hating one another. Why can I not believe something drastically different from you, and not simultaneously respect you, care about you, and maintain a civil, positive, and respectful relationship with you? Why should this impact our friendship?

Maybe I’m misinterpreting, but I feel that even since I was a kid, things have changed drastically. People used to engage in intelligent discourse. It could sometimes get heated, but that didn’t mean there was animosity. People were more divorced from the topics and could discuss them without walking away thinking there was reason to be upset, at the other person or in general.

Where did we go wrong?

When did we start closing ourselves off to those who may disagree with us?

Something’s happened over the generations. We have gotten weak. We’ve gotten soft. We run with fear when we hear opinions different from our own, and cower when those opinions are presented alongside facts.

Jewish tradition is replete with lessons about how to gain knowledge through questioning, engaging discourse, and learning from those different from you.

-An aside: I know there might be someone out there thinking that Judaism is loaded with dogma and that I’m cherrypicking facts to support my own worldview. Others might be thinking about their time in Jewish schools where their thoughts or opinions were not validated. I sympathize if your experience with Judaism differs from what I am presenting. It doesn’t change the fact that this IS the proper Jewish way of life and the only way I believe we can understand our traditional sources. If others are abusing their authority and treating my religion differently, they are acting shamefully. In my eyes, they do not represent an authentic Jewish perspective.-

The Benefits of Opening Your Mind

This topic is near and dear to my heart for so many reasons. I feel like my ability to listen to other people’s perspectives, and keep myself open to growth and change, is my single greatest quality. I have friends from all walks of life, and we can benefit from each other and care about one another, all differences aside. Furthermore, I can look at any issue, and even if I’ve already formulated an opinion (even a strong one), I’m never closed off to further influence. This attitude has resulted in major transformations in my life. And continues to do so.

In fact, just recently I discovered (to my intense delight) that just about everything I thought I knew about myself was wrong. For three years post-divorce I’ve been surrounding myself with walls to protect myself. And in an instant, I felt the walls come tumbling down around me. I felt everything change, and a feeling of intense satisfaction and enjoyment washed over my whole self.

The ability to know nothing opened me up to growth and change I never thought possible.

And everything’s different now. Everything is better now.

One thought on “The Ability to Know Nothing: A Deep Look at Argument and Disagreement”